It seems like I am on a baking spree this week, having baked for 4 days consecutively in a row. Since the mood of baking was present, I decided to make good use of it. From my tiny little library of aboout 30 bakebooks ( it is still growing), I lifted out this tiny handy booklet called Cakes and Slices and chose the Madeira cake.
When I first baked the Madeira cake, I thought it is just a lemon butter cake. After doing some reading, I found out that the Madeira cake is named after the Madeira wine.  The Madeira cake is a sponge cake commonly flavoured with lemon and is traditionally used in English cookery ( according to Wikipedia). 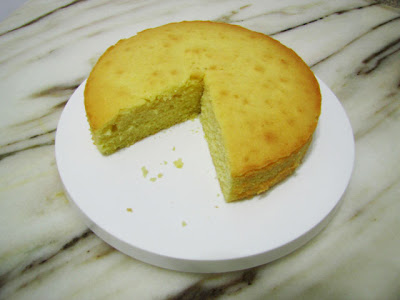 Based on my last experience, the cake turned out dry but has a nice buttery lemon flavour ( I forgot to man my oven and overbaked for 15 minutes, lol ). Hence, I tweaked the recipe a little and added 4 tablespoons of lemon juice instead. This resulted in a moist lemony cake with extra tang. The tang would linger in the mouth for a moment after the cake is swallowed. I was definitely too generous with the lemon juice.
The cake did not brown nicely as compared to the previous. One reason could be the reduced amount of sugar and the shorter baking time. It was done in 45 minutes when the recipe stated one hour. My last cake was baked for 1 hr 10 minutes, hence the dry texture. 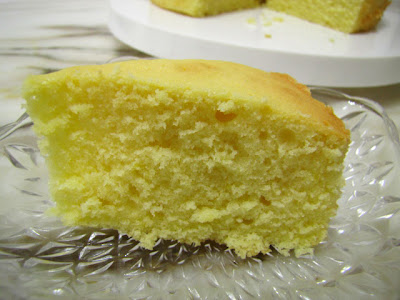 One bite into a slice of the cake reveals a firm yet soft texture. However, the extra tang of the lemon juice has snatched the glamour from the butter. Next time I would reduce the amount of lemon juice to balance the butter lemon fragrance.
Madeira Cake ( recipe adapted from Cakes and Slices )
Serving size: 7 inch or 8 inch round cake, 10 -12 slices
Equipment and materials:
1) Stand electric beater/ handheld electric beater or wooden spoon
2) Measuring spoon set
3) Flexible spatula
4) Mixing bowl
5) Wire rack
6) 18cm or 20 cm round pan
7) Flour sieve
8) Parchment/baking paper
9) Brush for oiling pan
10) Food grater for zesting lemon
11) Weighing scale

Ingredients:
180g butter, softened
175g castor sugar
3 eggs, room temperature and lightly beaten
185g self raising flour, sifted
Finely grated zest of 1 lemon (grated over the sugar and rubbed with sugar using hands)
2 tablespoons lemon juice
Method:
Preparing the tin: Line the base of a 18cm or 20cm round pan with parchment/baking paper. Grease the tin with oil or butter.
Preparing the oven: Preheat oven to 160 degrees C.
Creaming the butter: In a mixing bowl, beat butter on low speed until it is creamy. Add sugar rubbed with zest into butter and beat until sugar is evenly distributed. Increase speed to medium and continue to beat until butter mixture is pale and fluffy. Refer to How to Cream Butter for detailed explanations.
Adding eggs and lemon juice to creamed butter: Add beaten eggs to butter in 3 portions. Beat each portion until incorporated before adding the next portion. The butter and egg mixture should be well combined. Next, add lemon juice and mix well.
Adding flour to egg-butter-lemon juice mixture: Add sifted self raising flour in 2 additions, beating the first addition until absorbed before adding the second. After the second addition of flour is absorbed, scrape sides and bottom of mixing bowl with a flexible spatula. Beat for a further 30s  to obtain a smooth and well combined batter. Do not overbeat at this point in time after adding the flour or the cake will be tough.
Baking the cake: Pour batter into prepared cake tin and bake for 45-60 minutes.
Cooling and unmoulding cake: Run a spatula along the perimeter of cake to unmould cake. Cool cake upright on a wire rack.
Notes:
1) Rubbing zest and sugar will release more lemon flavour into the sugar and cake.
2) The taste matures and is even better the following day.
3) To add moisture, the recipe can be tweaked by adding yoghurt, sour cream or milk.
Posted by Bakertan at 1:39 PM