There is one thing I am good at which I am not at all proud of; I procrastinate. As much as I have the urge to bake bread sometimes, the idea is often shelved. As a result, my progress in bread making is far lagging behind as compared to other aspects of baking. One possible accomplice to my procrastination could be the undesirable outcome in my experience with sweet buns so far; they tend to become a little dense when left for sometime, which I deduced was either due to the direct bread method employed or the nature of the recipe itself. 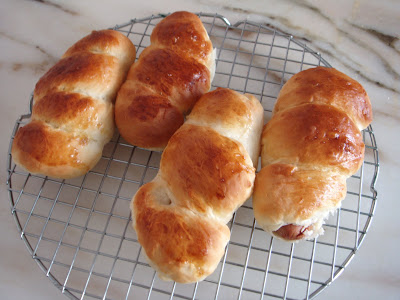 Finally, the day came when I tasted sweet victory in my battle with bread. I could not contain my excitement when I witnessed my hotdog buns coming out fresh from the oven. Despite the less-than-perfect appearance, the buns were amazingly fluffy, thanks to the water roux method. Even after leaving the buns overnight, they maintained their softness and fluffiness. Now that I have discovered the goodness of the water roux method, I am going to use it faithfully for most of my breads in future. 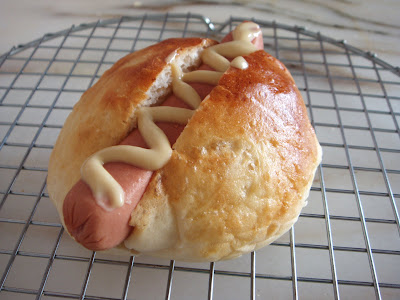 Handling the dough was a tricky process. The resulting dough was very sticky and using my instincts, I turned to flouring my hands to resolve the situation, which helped a great deal. I have to admit that I am quite a noob when it comes to bread making. I tried rolling a portion of the dough into a long strip, after which I wrapped it round a hotdog, hoping to achieve a spiral-shaped bun. I reckon I do need more practice to get the hang of shaping bread dough. For the remaining dough, I shaped them into ovals, which I later sliced lengthwise to place the hotdog topped with dijonaise mustard. 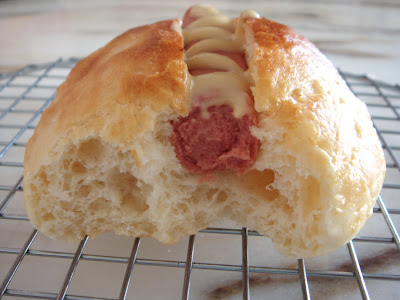 As one can see from the picture above, the cross section is airy instead of being densely knitted together like some of the bread that can be obtained from neighbourhood bakeries.

Prepare water roux buns -  Make water roux dough according to the directions stated in link above and allow dough to proof for the first time. Punched the dough when it is fully proofed. Test proofing of dough by gently pressing a finger into dough. Dough should spring back slowly.

Shaping the dough - Flour hands lightly when handling dough to prevent dough from sticking. Portion out dough weighing about 65g each. Roll pieces of dough into long strips before winding them around a piece of boiled hotdog to get spiral shaped buns. Alternatively, shaped the portions into ovals.

Baking the buns - Brush eggwash evenly over each proofed dough. Dough may be slightly depressed. Allow dough to rest for 10-15 minutes before baking at 180 degrees C for 12-15 minutes.