Whew! I am finally done with my cheesecake order. Glad that my friend's colleagues and boss liked it. They mentioned that I can start selling it outside. That was a sign of relief and at the same time some encouragement to me. Even though I have a certain level of confidence in my New York cheesecakes, there was this concern circling me. They had to be at least decent tasting to others as I do not want to embarrass my friend. As to whether I would want to start selling it, it would be highly unlikely. Currently, the only orders I would entertain would be from friends and family members.
Now that the cheesecake baking marathon is over, it is time to bake stuff for my own consumption. Its been ages since I said Hi to my long time friend - the Pandan Chiffon Cake. This was the very first baked good that was produced by my oven after several failed attempts.
Pandan is a common name known by southeast asians. It is also known as Screwpine to western countries, just like chinese sparsley is known as coriander or cilantro. In Singapore, we use it mainly to prepare Nasi Lemak, peranakan kuihs (colourful and dense chewy snacks), curry and not forgetting our signature green pandan chiffon cakes. Very often, pandan leaves are used in conjunction with coconut, just like the combination of rum and raisins. When the two are combined, a 'lethal' and highly addictive flavour is developed. 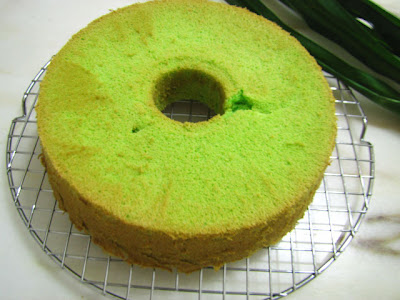 I came across a pandan chiffon cake recipe from Tested and Tasted and decided to try it out. The recipe was provided by Judy Koh from Creative Culinaire in the Sunday Times Lifestyle section. Something was puzzling me when I was browsing the recipe. It uses 4 egg whites but uses a 23cm chiffon pan. Previously, I have baked chiffon cakes which required 5 egg whites in a 21 cm pan and the size was just nice. The instructions also stated using a temperature of 190 degrees C which is much higher than what was expected.
Sticking to my instincts and experience, I baked the batter in a 21cm pan at 175 degrees C and reduced it to 170 degrees C. It rose to half the height of the pan, which was something I expected. Afterall, it could'nt have risen higher than a chiffon cake that uses 5 egg whites. Judging from the height of the finished cake, baking it in a 18cm pan would be more appropriate. 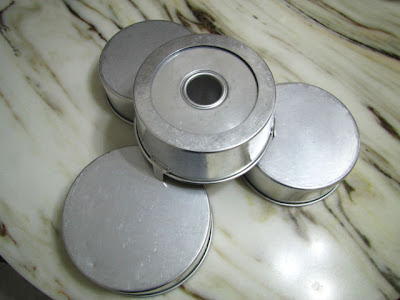 When the cake was done, I inverted the pan and rested its 3 'legs' on 3 round pans. Overall, the combination looks like a metal drum set. The cake turned out quite alright, except it sunk a little towards the inner perimeter, which was a first for me. Perhaps I should have stuck to 175 degrees C all the way. Looks like I have lost my mojo for chiffon cakes. Despite the slight imperfection, the cake was polished off in less than 3 hours. I ate three fifths of the light textured snack and my younger brother ate the remaining 4 slices in one shot just before he was tucking in to his takeaway economic mixed vegetables rice which was meant for dinner. So I inquired if he was hungry or the cake tasted good. He gave a unreserved reply agreeing to the latter - 好吃~ 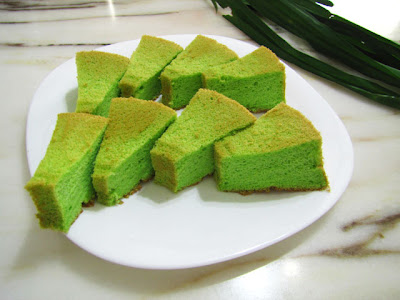 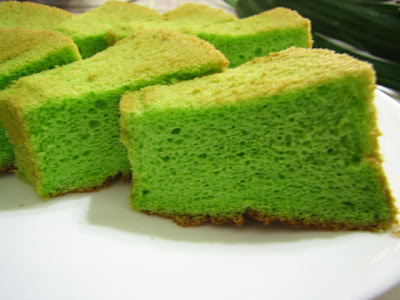 Method:
1) Preheat oven to 175 degrees C.
2) Wash the pandan leaves and cut into thin strips. Blend with the water. Add more water if needed. Pass the pandan puree through a sieve and set aside 3 tbs of the pandan juice.
3) In a mixing bowl, whisk together the egg yolks, 30g sugar, salt, corn oil, coconut milk, pandan juice and pandan paste until smooth and combined.
4) Sieve cake flour into egg yolk mixture and mix until smooth and combined.
5) In a metal bowl, beat eggs whites, cream of tartar and 40g sugar starting with low speed. When the egg whites turn frothy, slowly increase the speed to high and beat until egg whites are at stiff peaks. This is when the bowl is overturned, the egg whites would not budge. Egg whites form shiny and creamy upright peaks when beater is withdrawn.
6) Fold one third of beaten egg whites with a balloon whisk into egg yolk mixture to lighten and mix well. Incorporate the rest of the egg whites and fold gently to obtain a smooth uniformly coloured foamy batter. Scrape sides and bottom of bowl with a spatula to ensure batter is well mixed.
7) Pour batter into chiffon cake tin carefully and bake for 40-50 minutes.
8) Invert chiffon cake tin to cool before unmoulding.

Notes:
1) Chiffon tin must be oil-free. Do not grease, line or flour the tin.
2) Metal bowl for beating whites and beater must be oil-free. Egg whites should be at room temperature. These are necessary to obtain maximum volume for beaten egg whites.