Earlier, my friend helped me to buy 3 blocks of Elle & Vire butter from Sun Lik. Each block only costs S$3.20 whereas it is selling at Carrefour outlets for S$5.20. As it is manufactured in France and french butter are considered premium, I was looking forward to see if it would make any difference in my bakes. 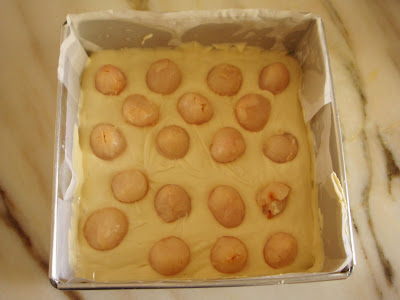 I chose a lychee butter cake recipe from one of my books: Baking with Fruits by Kevin Chai. It was weird that the recipe did not ask for any leavening agents. From a previous experience, a cupcake which I attempted from Martha Stewart's recipe which too did not ask for any leavening agents turned out to be dense. Hence, I tweaked the recipe to obtain a cake with lighter texture, omitting the almonds and cornmeal, substistuted an egg yolk for a whole egg, added some lychee sryup, used self-raising flour instead and increased the proportion of ingredients. The changes were so much that the recipe I formulated was no longer an adaption from the original. Rather it was a whole new recipe inspired by the original.
Following the pictures from the book, I placed drained canned lychees evenly on top of the batter. The lychees were supposed to be visible on top after baking, looking somewhat like a lychee version of  a pastry fruit cake. However, the batter rose and buried all of them. I then realised why the original recipe did not ask for any leavening agents. Perhaps that was the trick to keep them in place. Nevertheless, I did not regret my decision. I would rather have a cake with a more desirable texture rather than one that is pleasing to the eyes but fail to satisfy my palate. 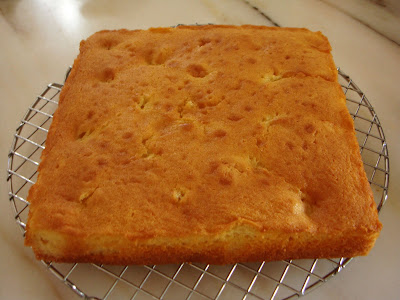 The end result was a nicely browned lychee butter cake with slightly uneven top due to the batter rising and making its way about the lychees. Anyway, that did not matter much since the cake was going to be sliced up anyway.
My efforts were rewarded as I dug into a rich and fragrant butter cake. The lychees were a little soft though and tasted mushy. Well, lychees are definitely unlike apples which can keep their firmness well after baking. I guess this is why apples are a favourite fruit choice among bakers, including me. 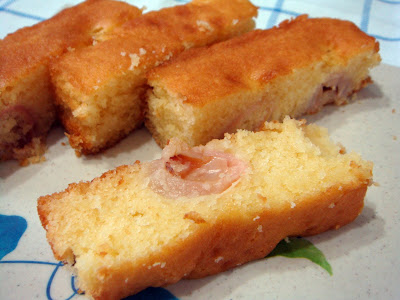 Among the brands of butter I have tried, Elle & Vire is certainly quite outstanding. I could taste the richness of the sweet unsalted butter, or maybe my palate was tricked by the salt and the lychee syrup. Anyway, I am pleased with my new found lychee butter cake recipe. If there is anything that I need to change, it would probably be using smaller bits of lychees instead since the lychee wholes do not hold well to the butter cake after slicing.
Lychee Butter Cake (Recipe inspired from Baking with Fruits by Kevin Chai)
Serving size: 20cm/8 inch square cake, 16 slices
Equipment and materials:
1) Stand electric beater/ handheld electric beater or wooden spoon
2) Measuring spoon set
3) Spatula
4) Mixing bowl
5) Wire rack
6) 20cm (8inch) square pan
7) Flour sieve
8) Parchment/baking paper
9) Brush for oiling pan
10) Weighing scale
11) Balloon whisk
12) Aluminium foil

Method:
Baking preparation: Preheat oven to 180 degrees C. Line a 20cm/8inch square pan with baking paper.
Prepare dry ingredients: Sift flour into a large bowl. Add in salt and use a whisk to combine the flour and salt, ensure the salt is evenly distributed.
Making the batter: In a mixing bowl, beat butter with sugar until pale and fluffy, as mentioned in How to Cream Butter. Add in whole eggs and egg yolk one by one to the creamed butter. Beat on medium speed until each egg is combined before adding the next. Scrape the sides and bottom of mixing bowl with a spatula after the third egg is beaten and combined. Beat the mixture for a further 15 seconds. Next, add in the lychee syrup. Beat until combined.
Incorporating the flour: Lastly, add in the flour mixture in two batches. Beat until the first batch flour of flour is absorbed before adding the second batch. Once the second batch of flour is absorbed, scrape sides and bottom of bowl with a spatula to incoporate stray flour. Beat for a further 30 seconds to ensure batter is smooth and well mixed. Do not overmix or cake will be tough.
Adding the lychees: Fold half of the sliced lychees into cake batter and ensure lychees are evenly distributed. Pour into prepared tin and level top with a spatula, Spread the remaining lychees evenly on the top of cake batter.
Baking the cake: Bake at 180 degrees C for 40-45 minutes. To test for doneness, insert a toothpick or wooden skewer. It should come out clean. If not, return to oven to bake untill done.
Notes:
1) Top of cake may brown faster than it is being cooked. If this happens, use a piece of aluminium foil to cover the top of the square pan.
2) 3 whole eggs can be used instead of using 2 eggs and 1 egg yolk. Having more whole eggs will result in a stronger structure and hence a less tender product. I substituted the egg yolk for whole egg to give a slightly more tender product.