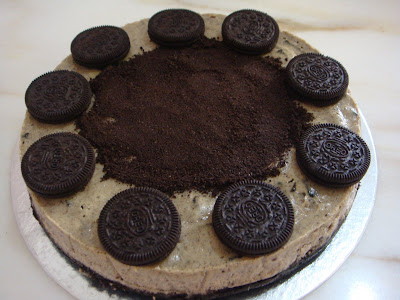 Earlier, my apple-upside down cheesecake vanished without a trace. This time round, I made sure that the same thing would not happen again.

Unlike the previous attempt, I decided to tweak the filling a little and simply added some finely ground Oreo cookies to the filling, hoping to achieve a texture similiar to that of cookies and cream ice cream, cream coloured with tiny flecks of Oreo. I ended up being too generous with the addition and the cheesecake filling turned out to a greyish-brown hue. 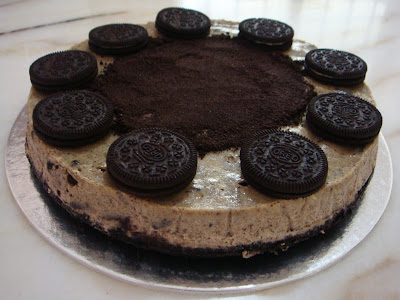 Decorating the cake was easy. It only involved placing Oreo sandwich cookies near the edges round the cheesecake. Some finely ground oreo crumbs were sprinkled in the middle for a final touch. After everything was in place, all I had to do was wait for the results.

Before the cutting of cake, I warned and apologized to my friend that I might have overbaked the cake. It turned out that my worries were unfounded. Whew! The Oreo cheesecake was desirably dense and smooth in the mouth. Nope, not dry at all as I had thought. I had been duped. 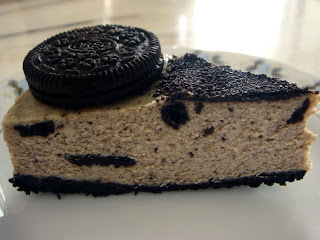 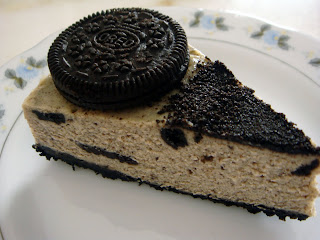 Method:
Making the base: Prepare biscuit base as mentioned in Preparing a Cheesecake Tin. Freeze prepared base for 10 minutes or until ready for use.

Preparing cheesecake filling: Beat cream cheese and sugar untill creamy on medium speed. Add whipping cream and vanilla extract to cream cheese mixture on low speed. Beat until smooth and incorporated. Do not overbeat else the cream may separate (due to excessive beating), resulting in a grainy batter. Lastly, add the eggs and beat until combined on low speed.

Adding in cookies to cheesecake filling: Add in the finely ground cookie crumbs from 10g Oreo cookies (with cream removed) to the prepared cheesecake filling. Next, mix in the finely ground cookie crumbs a little at a time. Stop adding once you are satisfied with the colour. The objective is to obtain a texture similar to cookies and cream ice cream with tiny flecks of Oreo cookie. (This step is optional)

Lastly, fold in the coarsely chopped cookie bits, with or without cream filling as desired.

Baking the cheesecake: Pour filling onto biscuit base. Wrap top and sides of spring form tin with aluminium foil as mentioned in Preparing a Cheesecake Tin. Bake at 150 degrees C for 1 hour 15 minutes in a water bath. The filling should be set and will not jiggle much when pan is moved.

Decorating the cheesecake: To decorate the cheesecake, place the 9 Oreo sandwich cookies near the edge and around the cake. Sprinkle with oreo cookie crumbs in the centre. Serve cheesecakes chilled.