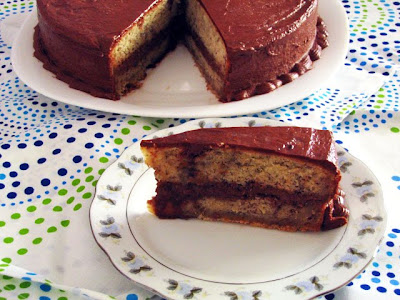 What was meant to be a banana cake turned out to be a banana kueh instead. I had planned to try out the banana cake with chocolate frosting from Nancie McDermott's Southern Cakes. Borrowed the book a second time and I was tempted to at least try out one of the promising cakes.
I can only say my journey was wrought with perils. Only several hours after I assembled the cake did I realise I made a grave mistake. I added too much buttermilk, thinking that the cake required 1 cup when the recipe stated 1/2 cup. This was a blatant mistake. No wonder the cake did not seemed to rise much. There was far too much liquid for the amount of raising agents.
Problems did not just stop at that. While making the frosting, the cocoa and butter mixture turned into an oily messy instead of a shiny essence as described as in the book. This was a familiar sight as I had such encounters previously. Determined to produce the frosting, I re-attempted and this time round I did not follow the instructions in the book. What I did was melt the butter first then added the evaporated milk and the cocoa powder. This should had been the proper method. There were still random grains of unmelted cocoa lying around but I decided to proceed with the addition of icing sugar. It was like undissolved bits of Milo powder when room temperature water is used. 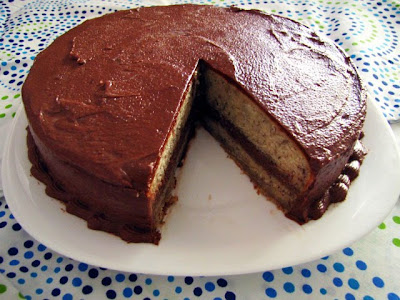 I was skeptical about the amount of icing sugar used. It says 4 cups which is about a whooping 460g of sugar needed. In the end, I only used 300g of icing sugar to allow the frosting to reach a fudgy consistency. When I sampled the frosting, it was disgustingly sweet! Imagine even a sweet tooth like me cannot stand the sweetness. Nevertheless, I assembled the cake and prayed that the overall taste would not be so sickly sweet afterall. Thankfully, the sweetness of the assembled cake was mellowed down to an acceptable level, albeit it was leaning towards the sweet side. Perhaps due to the chilling of the the cake overnight, it tasted like a chocolate frosted layered banana kueh. Interesting~
My Lessons Learnt:
1) Read the ingredient list CAREFULLY.
2) Melt the butter first before adding the cocoa powder. Do not dump both the butter and cocoa together to melt.
3) Avoid frostings with ridiculous amounts of sugar.
Posted by Bakertan at 11:41 AM