Its another cake project! October is a busy month for me, when most of my close friends are having their birthdays. This is the second birthday cake I baked in the same month and its a rather elaborate one, which means lots of work involved. Tiring.... whew!

Since the cake is meant for my friend's 21st birthday, I wanted to make a layer cake that is really memorable for her. It would have to be both aesthetically appealing and pleasing to the tastebuds. After discussing and exchanging ideas with another friend, Aud, we had some good ideas coming in. Here's the blueprint: 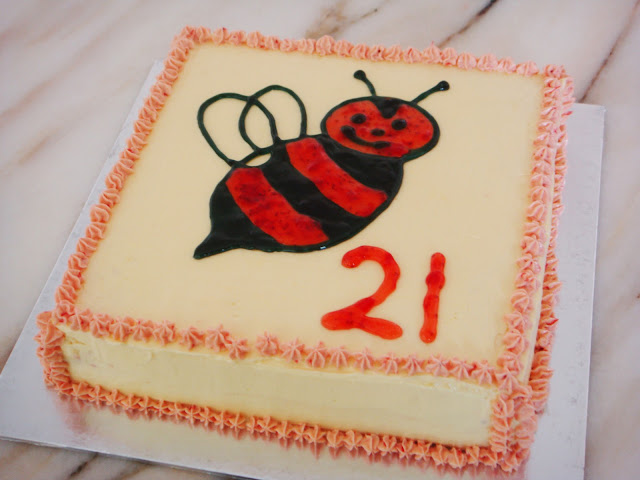 The reason why we thought of the bee picture is because the birthday girl is named Bee, and pinkbee is her nickname (reminds me of a blogger friend Bee Bee who has a similar name). Now, that sounds like an enormous challenge to me. It was my first at attempt making homemade jam and drawing using piping gel. I get the jitters sometimes when I attempt something new. Its the worry of coping with the unfamiliar. Things may or may not turn out as planned. This time, I felt a somewhat adventurous spirit in me. My limited drawing ability would not deter me from completing the bee picture. ( I did thought of chickening out initially due to a lack of confidence, but I carried out the task anyway since I had bought the piping gel and thanks to encouragement given by Pei-Lin)

I was glad to have Aud helping me out with part of the caking making, namely the buttercream and baking the sponge cake. If not for her, I would have taken a much longer time to complete the entire cake, with all the measuring of ingredients and washing up of pans and bowls, some of which needed to be reused. 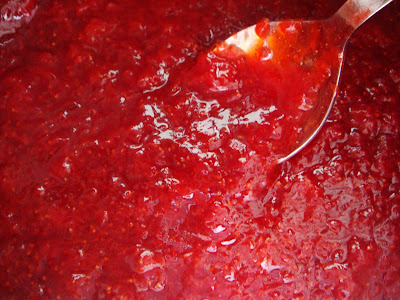 Making the strawberry jam was a breeze. First, wash and slice the strawberries into small chunks. Add sugar and mix well with the strawberry chunks and allow to sit for some time. This will draw out the juice. Bring the mixture to a boil and it will thicken nicely. Tada! There you have, a nice homemade strawberry jam. I followed Happy Homebaker's advice and added some lemon juice, which is supposed to help the jam gel together. It also adds a nice tartness to the jam. The steps were easy to follow and yielded a promising result; one of the best strawberry jam I had! Would not hestitate to attempt making jam again when the occasion arises. 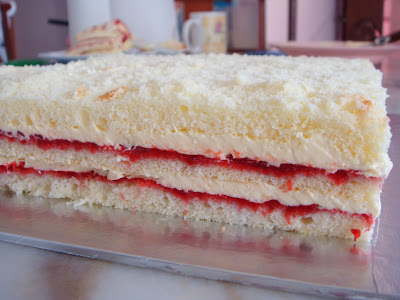 We had intended the cake to be a 9 inch square. After trimming the sides, it shrank to an 8 inch square. I gathered all the cake trimmings and sampled them with the remaining jam. Yummy~! It has a summery fruity sweet taste with a pleasant tang. Since the fruits used were kind of summer related, I decided to name the cake as Summer Passion Cake. The first name that came to mind was Whispers of Summer, but that was'nt original as it is the name of a fruit juice drink I like from Ceres. I could'nt stop sampling and all the cake trimmings were gone in two days. (there is quite abit of cake trimmings). Oops! I actually ate the cake even before before the cake cutting. (*feels a little guilty, well maybe not, haha) 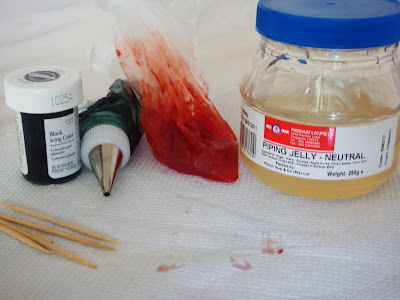 As you can see, the above are my drawing tools. No palette and paint brushes used. No artist hat and drawing stand either. Just my chef hat and my apron. Haha, just kidding =].  My piping bags are home-improvised using freezer bags. Sometimes, I would use ziplop bags. These work pretty well and can be used for various purposes like storing buttercream and frostings etc. The bottle on the right is the piping gel/jelly used, obtained from Phoon Huat.
You might be wondering why there are toothpicks lying around. These are my 'pencils', used for sketching the bee picture. Firstly, I googled and selected the bee picture I had in mind. I then copied it down on paper as I do not own a printer. With the original bee picture beside me on paper and the cake in front of me, I began to do the initial outlining using a toothpick. If the sketching is out of porportion, simply wipe it away using a spatula. It will smooth the buttercream surface and act as an eraser.
After the initial sketching is done, pipe black coloured piping gel (mix some black colouring into a portion of the gel) onto the outline.The piping gel has the consistency of jam and is rather easy to control. So no worries about it overflowing and messing up the surface. Once the black outlining is done, fill up the necessary places with the desired colouring and you have a nice picture with a glossy stain glass effect. I mixed a little jam into the gel as I did not have any red colouring on hand. Just realised that I used more jam than I should and it turned out red instead of pink only after the picture was done.
The making of the Summer Passion Cake was a great success and I had loads of fun! Imagine me going on a baking adventure likened to a roller-coaster ride. Too bad Aud missed out on all the fun part, especially the drawing of the bee. I'm going to think of more opportunities to work with piping gel in future. I think I found my niche in baking and its going to be cakes and the likes of it; cupcakes, layer cakes, swiss rolls and cheesecakes; since its the area I am more proficient in and enjoy the most. Not into fondant making at the moment yet. I might get too addicted if I start making them.

Making the egg yolk batter: Place egg yolks, 65g caster sugar, oil and water in a large bowl. Mix well with a wire whisk untill the mixture is evenly mixed. Add the flour mixture in and whisk to obtain a smooth and thick batter.

Folding in egg whites: Using a ballon whisk, fold one third of beaten egg whites into egg yolk batter gently to lighten and combine. Fold in the rest of the beaten whites to combine. Final batter should be foamy and uniform in colour with no streaks of egg white present. Folding egg whites gently using a balloon whisk will prevent egg whites from deflating too much.

Baking the sponge cake: Pour batter into a greased and lined 9 inch square pan and bake at 160 degrees C for 25 -40 minutes. Test doneness using a skewer or toothpick. When the cake is done, the inserted skewer will come out clean. Cake will shrink from edges on cooling. Unmould sponge cake and leave to cool on a wire rack.

Making the Strawberry Jam:
Wash and slice the strawberries: Wash the strawberries well. Drain the water and remove the leaves. Slice them into small chunks. The chunks will break up when cooked.

Cooking the jam: Bring the strawberry mixture, together with the juice to boil in a stainless steel pot or saucepan (do not use aluminium, cast iron or copper pans) over medium heat. Stir the jam constantly. The jam will thicken and start to foam when it boils. Scoop off the excess foam and continue stirring.

Lower the flame and keep it at a medium simmer. Continue stirring and the jam should become thicker and transparent, no longer foamy. Add in the lemon juice slowly and continue to simmer for another 2minutes. Allow jam to cool before using.

Preparing the Swiss Meringue Passionfruit Lemon Buttercream:
Dissolve sugar in egg whites: Place 195 egg whites and 245g granulated sugar in a heatproof bowl. Sit the heatproof bowl on a saucepan filled with water. The base of the bowl should not be in contact with the water. This is known as a double boiler. Bring the water in the saucepan to a slight simmer. Use a balloon whisk and stir the egg whites and sugar constantly until the sugar has fully dissolved and the mixture is warm to the touch (test by inserting your finger). Take care not to scramble the egg whites.

Spread a thin layer of jam evenly onto the first layer. Fill the first layer (on top of the jam layer) evenly with 230g of buttercream using a palette knife or spatula. Place a second sponge layer carefully over the filled 1st layer and align it properly with the 1st layer. Repeat the spreading of jam and filling of buttercream for the 2nd sponge layer.

Piping Patterns: Fill a piping bag fitted with a star tip and pipe stars at the border. Add colouring to frosting if desired. I used wilton star tip no.4.

Drawing with Piping Gel/Jelly: Steps are mentioned above.

Notes:
1) Store cake in airtight container in the refrigerator to prevent cake from drying out after slicing.
2) Buttercream recipe can be altered and flavoured acording to taste as desired. For example, strawberry, coffee, rum, Ribena and orange flavoured buttercream. Jam or cordials would work well as flavourings.
2) The buttercream will hold at most 150ml of liquid. Hence, jam, cordials and concentrates are best for flavouring. In this case, using passionfruit concentrate will produce a buttercream with a stronger flavour.
Posted by Bakertan at 11:35 PM