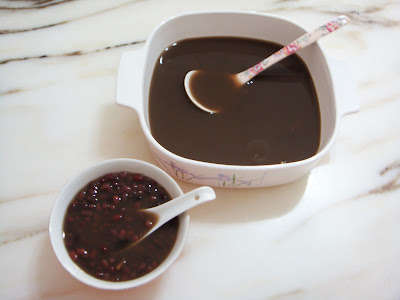 In Chinese context, desserts are usually served as wam soups, custards or pastes. The cantonese especially, loves to prepare what is known as Sweet Soups or Tong Sui (糖水). An example of a cantonese sweet soup is the Red Bean Soup.

As the name suggests, red bean soup uses adzuki beans which is commonly known as red beans to the chinese. The preparation of this sweet dessert soup is rather simple and does not require much effort, which suits newbie cooks like me perfectly. 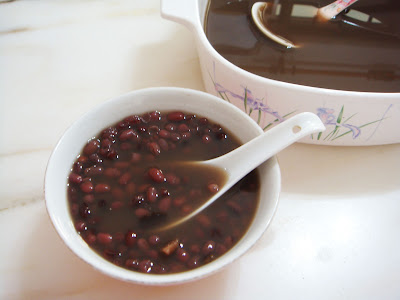 The preparation process starts off with rinsing the dried adzuki beans in water and soaking them in water for 2 hours or overnight to soften them. After soaking, the beans will swell up. Next, simply add these beans into a pot filled with water. Drop in some chopped dried orange peel and a knot of pandan leaves (screwpine) and bring the mixture to a simmer. The orange peel will impart a nice citrusy flavour whereas the pandan leaves will bring out the aroma of the sweet soup. When the beans have softened and the soup becomes murky, add in rock sugar to taste and the sweet soup is ready to be served. Voila! (Some people like their red beans to be all mushy and sandy, where the red bean skin has separated from the interior. I like mine to be softened yet retain its bean form, as can be seen in the pictures.)

Sounds simple eh? It is as simple as it sounds! I have prepared this several times and brought a pot of it to a potluck on one ocassion. After sampling it, my friends gave the thumbs up. 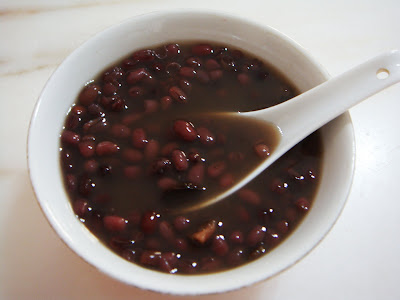 In the pictures, my red bean soup looks very watery. This is because I ladled out a portion of it into a smaller pot. Towards the bottom of the pot, the consistency becomes thicker and paste-like. Be sure to give your red bean soup a good stir become you ladle it out into a bowl. I am quite a fan of red beans and love to have my red bean soup served chilled.
﻿
Red Bean Soup (recipe adapted from Delicious Nyonya Kueh & Desserts by Patricia Lee)
Serving size: 10 - 12 bowls
Texture and taste: Soupy and murky with the goodness of adzuki beans with a hint of citrus.
Equipment and materials:
1) A large pot
2) Ladle

Cooking the red bean soup:
Soak the beans: Rinse the dried beans well. Soak them in water for 2 hours or overnight. Discard the water.

Boiling the soup: Place the beans with the chopped orange peel and pandan leaves in a pot filled with 2.3 litres of water. Bring the water to a simmer and cover 3/4 of the surface of the pot with a lid. Let the mixture simmer until the beans are softened. Start checking on the softness of the beans after 45 minutes and every 20 minutes afterwards (It takes a very long time to soften the beans. I did'nt really take note of the time. 45 minutes is probably not enough but will be a good time to start checking). It can take up to 2 hours or even longer to reach the desired softness, depending on the strength of the boil.

After boiling the mixture for some time, a portion of the water would have evaporated. Add in water to bring it to the original level.

Adding sugar: When the beans have softened to your liking, add in the rock sugar to taste, stirring until they have dissolved. turn off the flame and serve the dessert warm. Remove and discard the pandan leaves.

Notes:
1) Lily buds and lotus seeds go along quite with this dessert, as suggested by my friend Pei-Lin.
2) I prefer to use rock sugar for red bean soup as it brings a different kind of sweetness to it.