This week has been a tiring week for me. I had to brave the glaring sun and the occasional drizzle, thanks to the fickle weather. After six days of YOG labour at the Tampines Bike Park, I am now overly tanned and my skin colour is charcoal black. Nevertheless, I was glad to be there to contribute and witness this once-in-a-lifetime opportunity where Singapore is the host for the Inaugural Youth Olympics Games.
After reaching home each day, I feel that all my energy have been zapped. It was hard to even think about baking. Yesterday was a good opportunity to put my hands to work in the kitchen. I had the sudden impulse to bring out a special baking toy that I have bought a few weeks back - a 3D mini teddy bear mould. The mould did not come cheap. It costs nearly 30 bucks, not to mention that I had to get a coupler set, four Wilton piping tips and a Wilton black icing colour in order to use this new toy of mine. 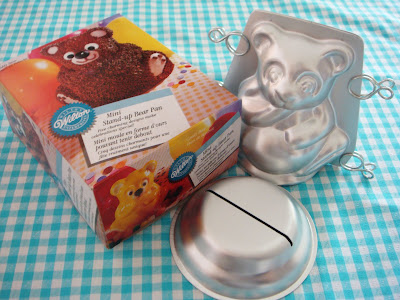 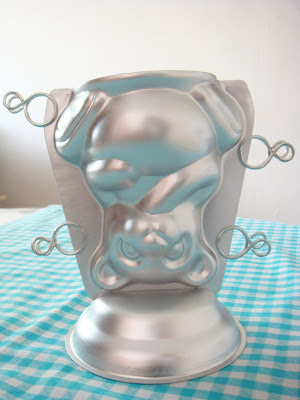 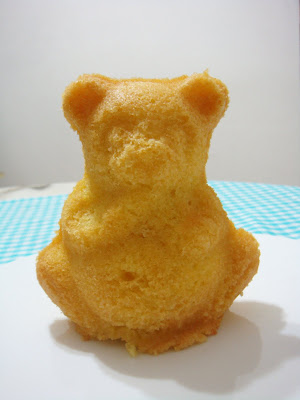 The instructions call for one cup of batter, which I referred to my madeira cake recipe, halved the portion and omitted the lemon flavouring. 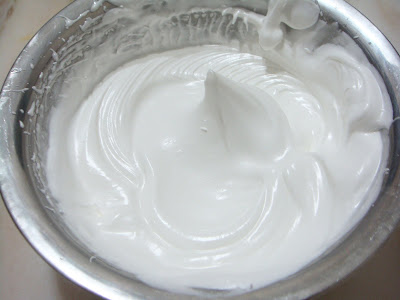 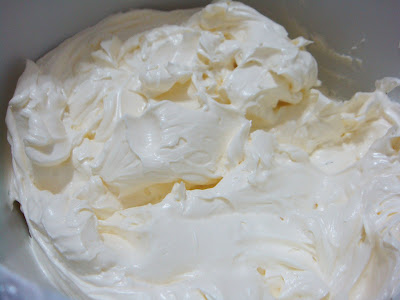 For the frosting, I did not use the one that is provided - a icing sugar buttercream which I did not fancy. The result is a high sugar content frosting with a gritty mouthfeel. Instead, I referred to the buttercream frosting from Dorie Greenspan's Perfect Party Cake.
I tried doing the Perfect Party Cake a total of 3 times but it none of it was near perfect. The white cake simply did not rise and the end result was a dense sponge. Eager to find out what went wrong, I googled and realized that many others had problems with the cake rising as well. After some analysis ( typcial of me ), I suspect that the baking powder was the culprit. That was the only time when I used a single acting baking powder. Ever since then, I dare not use any single acting baking powder again. Despite the poorly turned out sponge, the frosting was a keeper. It was one of the best frosting I had tasted to date - Swiss Meringue Lemon Buttercream. That was my first encounter with a meringue buttercream.
There are many kinds of buttercream. Some buttercream simply ask for softened butter to be beaten with icing sugar. Others call for the use of egg yolks. As the name suggests, meringue buttercream involves using a meringue as a base. A meringue is a mixture of whipped egg whites and sugar. The end result is firm, glossy and pillowy.
In all,  there are four types of meringue buttercream: Swiss, Italian, French and German. Swiss buttercream involves beating the egg whites and sugar over a double boiler until the egg whites are warm. The egg whites are then whipped untill stiff and cool to the touch. Butter is then added to the Swiss meringue and beaten untill fluffy. German buttecream combines pastry cream (creme patisserie) which is a custard in nature, and butter. For the French buttercream, hot sugar syrup is poured onto the whole eggs (sometimes with extra yolks) while they are whipped. Lastly, the Italian buttercream is similar to the French buttercream, with the exception that egg whites are used in place of whole eggs. Buttercream is commonly flavoured with citrus fruits, chocolate, vanilla or liqeuers. 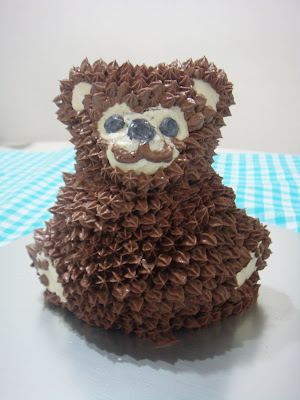 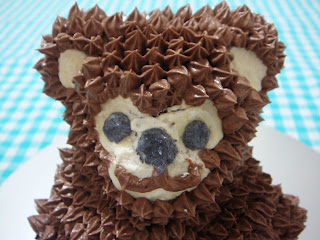 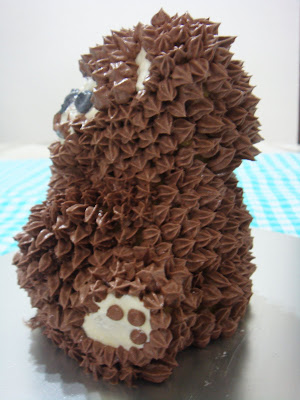 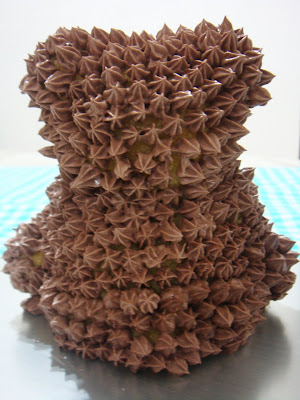 To pipe the details on the bear, I separated my buttercream into 3 main portions. I kept one small portion plain, added cocoa powder to brown the second portion and tinted a small portion black with the Wilton icing colour. Since the recipe yielded quite an amount of buttercream, the remaining were kept for further use.
Piping the stars on the bear's body certainly took me some practice. Some stars ended up tiny while others ended up larger. The overall effect was a spikey brown teddy bear. The front part was packed with stars while the back had some sparse spots, which I noticed only after taking pictures of the finished bear. I am not quite satisfied with the facial features. It made the bear look more like a monkey. The eyes and nose were of a greyish hue rather than black as I did not add enough colouring.
Overall, it was'nt as time consuming was very time consuming considering that the bear is only 11cm tall and 10cm at its widest part, taking me about 3 hours to do the piping alone, not to mention having to spend more time clearing the mess. It sure was fun practicing the piping which is considered a first for me. Give me some time and I should be able to do a more decent decorated bear to present to my friends for their birthdays. I definitely look forward to making good use of my new toy and coming up with bears with different look. No regrets getting this new toy at all ~
Posted by Bakertan at 2:20 AM