Birthday Cake For My Cousin 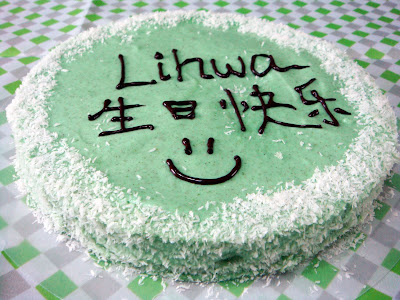 Baked a pandan kaya cake at the request of my godma (my aunt) last sat. It was meant for her daughter (my cousin) whose birthday is around the corner. When she mentioned that my cousin love pandan cakes, the pandan kaya cake from aunty yochana's blog immediately came to my mind. I have made it twice previously and it was well received by my friends. 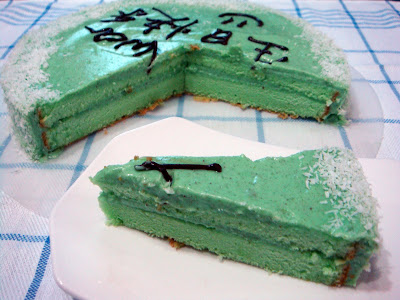 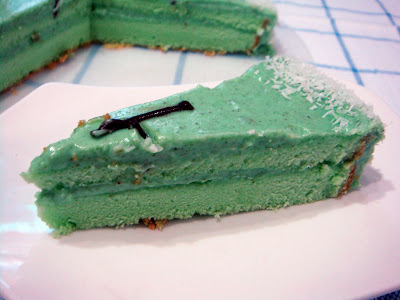 Things did not proceed smoothly at first. My handy electric handheld mixer was down a few days back and I thought it would be alright to use a balloon whisk. To my dismay, I was proved outright wrong. I had to use tremendous strength to beat the sponge mix and eggs and the end result was far from satisfactory. It seemed that the volume obtained using manual effort was much lesser compared to using the electric mixer. Nevertheless, I finished up the cake batter and popped the pan into the oven. The baked sponge was only two-thirds of what it should have been. I was rather disappointed because I knew I could do it better if my electric beater was working.
Casting my disappointment aside, I worked the remaining of the cake. As the height of the cake is less than desired, I adjusted the amount of pandan kaya fudge to balance up. 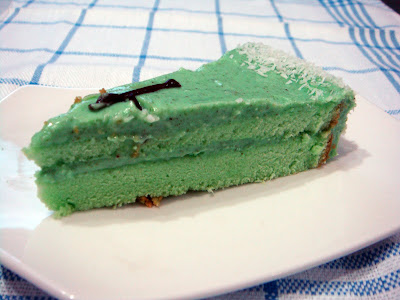 Everything worked out fine in the end. The fudge turned out slightly soft though, perhaps due to insufficient setting time. For the wording, I planned to use white chocolate initially. However, the white chocolate would not melt. After 3 attempts, I changed to using dark chocolate instead. It has been such a long time since I have written any chinese characters manually. I have almost returned all of it to my chinese teachers. My mum was beside to guide me when I was questioning whether the strokes were correct, especially for the word "快".

When I sampled a slice of the cake, it was not as dense as I thought it would be even though the sponge cake did not rise as much due to insufficient beating. On the contrary, I received raving reviews for it from my family members.
I learnt a lesson from this - never attempt to bake without the use of my trusty electric mixer again.