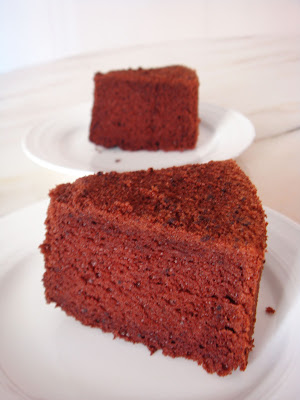 Earlier this August, I received a surprise e-mail from one of my readers, Stephanie. She came to know about my blog through Edith and had read up my post on finding a baking buddy. After some exchange of mails and sharing of our interests and experiences, we met up shortly and began to pass each other our bakes.
We had wanted to indulge in a baking session together but somehow our schedules never quite matched. So, last friday was the perfect opportunity to realise the plan.
There wasn't much of a plan to start with. I only knew that I wanted to do blueberry orange muffins. After browsing through some books, we decided we would do a chocolate chiffon cake as well. 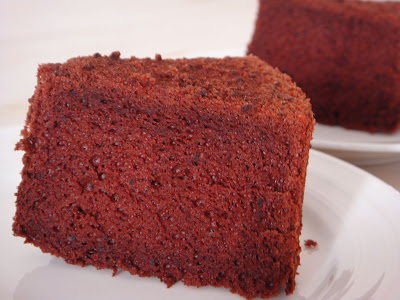 For the same amount of time we took to prepare the blueberry orange muffins and the chocolate chiffon cake, I would only have been able to bake one of the items. Everytime I bake, there is always tons of preparations waiting for me to carry out. Washing of equipment and pans.Weighing the ingredients. Melting chocolate. Lining the baking pan. Separation of eggs. The list goes on....  I am quite slow-paced and completing these tasks can take me about 30 minutes to 1 hour. With a baking buddy around, all these tasks seemed effortless.
All went smoothly and it was the perfect note to end our first baking session. The flavour of the chiffon cake was well delivered, thanks to the magic of Valrhona cocoa. One thing that needs to be improved on though would be the mixing of the ingredients. Kevin Chai asked for dark chocolate to be melted with milk but the two do not blend together smoothly, resulting in dark streaks in the mixture and chocolate soil-like particles in the final product. After reading Bee Bee's post on her dark chocolate chiffon cake, I figure that I will avoid this the next time by mixing the oil and the melted chocolate together instead. Will be posting the recipe next time when I have made adjustnents. 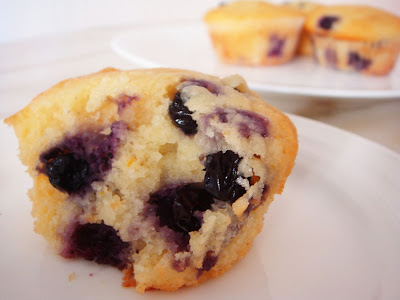 It has been more than a year since I attempted making any muffins using the dry and wet method. I was'nt satisfied with the texture of my previous baked muffins. It seemed that they turned dense quickly upon cooling, losing that soft and fluffy appeal. Since then, that poor impression stucked with me for quite a while, until Anncoo's blueberry orange muffins recipe caught my attention.
The muffins turned out cakey with a buttery fragrance, almost as if creamed butter had been used (no butter was used). It was a pity the blueberries tasted quite bland. Nevertheless, the combination of yoghurt, olive oil and orange zests made up for it and contributed their share to the flavour. What I liked best was that the muffins retained their tenderness upon cooling. This is a clear indication that the recipe is a keeper. 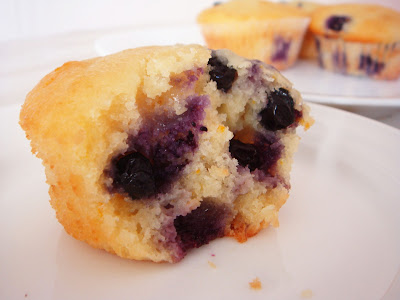 That pretty much sums up my first baking session with my buddy. It was fun and refreshing! Definitely look forward to having another bake therapy and churning out more bakes with her.
Blueberry Orange Muffins:
Recipe from Anncoo Journal
Posted by Bakertan at 1:15 AM