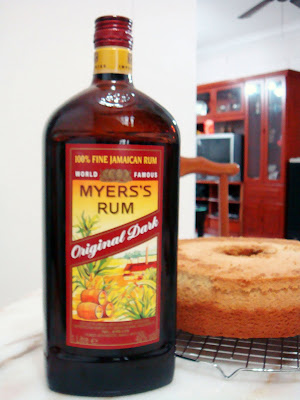 After some hesitation on which recipe to try, I decided on a butter rum cake from All cakes considered. I am glad I found another recipe that can put my Myer's dark rum to good use. One litre bottle of rum is enough to last me a year I think, considering that most recipes only require one tablespoon use of rum. 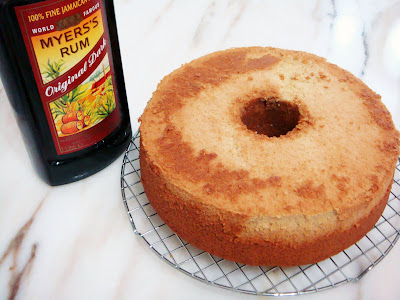 Having read through the recipe, I converted the measurements from cups to grams. It was somewhat troublesome to do so and I would have preferred recipes to list weight of ingredients instead. The recipe asked for nearly 400grams of sugar. Thats a whooping lot! I cut down some of the sugar and added 2 another tablespoons of rum. I also substituted buttermilk using milk and lemon juice.
With the amount of sugar outweighing that of the flour and butter, the high-ratio method of mixing was employed. The dry ingredients were added to the batter alternating with the liquid.
The cake was then baked in a tube tin and when it was done, the top splitted quite badly. It did not affect the appearance much though since the cake would be flipped upside-down. In the picture above, the butter rum cake looked almost like a chiffon cake. 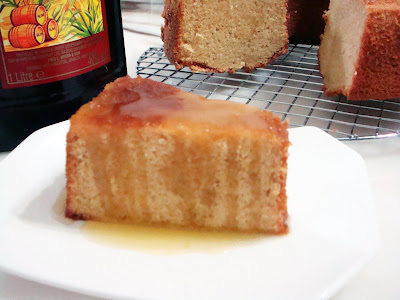 When the cake was done, I made the glaze and spooned some of it over a slice. This is the first time I am doing a syrup glaze and I found it was way too sugary sweet without much presence of rum, afterwhich I decided to do without the glaze. Haiz..There goes my butter again... I think next time I will do a taste test whenever I am baking a syrup cake.
Upon my first bite, I found that the cake is similar to a banana cake in texture. Dense, yet soft and moist. Most of the flavour came from the brown sugar and there was a subtle presence of rum, most of which I think was burned off in the oven. The taste is however slightly on the sweet side. I shall cut down more on white sugar the next time.
Butter rum cake ( recipe adapted from All cakes considered)
Equipment: 10 inch tube tin

Ingredients:
225g butter, softerned at room temperature
200g caster sugar ( try cutting down on this as cake is quite sweet)
165g light brown sugar
4 large eggs, 60g each and at room temperature
3 tbs dark rum
330g cake flour
1 tsp salt
1 tsp baking soda
240ml milk combined with 1 tbs lemon juice
Method:
1) Preheat oven to 160 degrees C and grease a 10 inch tube pan with butter or oil.
2) Cream butter with both sugars on medium high speed until fluffy.
3) Add in eggs one by one into the creamed butter on medium speed, beating for 20 seconds after each egg is incoporated.
4) Add rum to batter and beat in to incoporate.
5) Sift flour into a large bowl. Add in the salt and baking soda. Stir using a whisk to combine and evenly distribute the dry ingredients.
6) Add one quarter of the flour mixture to the batter. Beat until just incoporated on low speed. Next, add in one third of the milk mixture and beat until just combined. Repeat this process, alternating dry and wet ingredients. You should start and end with the flour mixture.
7) After all the ingredients are combined, beat the batter on medium speed for about 30 seconds to ensure it is well incoporated. Scrape the sides and bottom of the bowl with a spatula once in a while, during the beating process from steps 2 to 6.
8) Pour batter into cake pan and bake at 160 degrees C for 1 hour 10 minutes. Check for doneness after 1 hour by inserting a wooden skewer halfway between the sides and middle. The cake is done when the skewer pulls out clean. If not, return the pan to the oven and check for doneness every 5 minutes.
Notes:

1) This cake has a nice flavour but it is quite sweet. Try cutting down on the castor sugar.
Posted by Bakertan at 5:28 PM