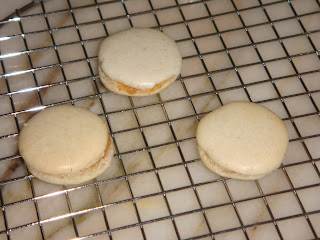 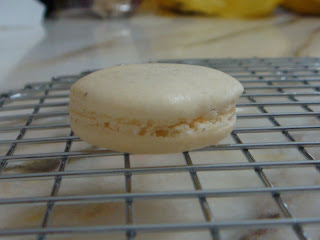 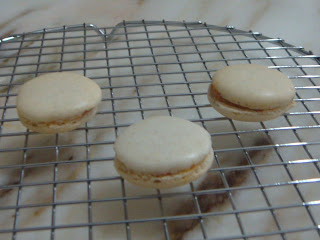 I attempted to bake macarons for the 2nd time last week. On my 1st bake, i took the opportunity to polish my piping skills. At first i made quite a mess with the batter while piping. However, i soon got the hang of it after some practice.
Making macarons certainly was no easy task. I read that macarons have a high failure rate especially when using the french meringue method. In both my 1st and 2nd attempts, I managed to get the right consistency of the batter - shiny flowing lava. The tough part was the oven temperature and baking time.
During the 1st 8 mins on my 2nd attempt, my macarons developed 'foot'. I sure was excited about that. However, I had difficulty in getting the base of the macaron to be cooked. I baked the macarons for nearly 25mins before the base was nearly dry when the recipe stated only 10 -11 of baking time. Due to the long baking time, my macaron browned when they were supposed to look shiny.
Even though the macarons on my 2nd attempt were like 80% successful, the taste was quite ok. it tasted chewy on the 1st 2 days. After a few days in the fridge, they tasted better without the chewiness.
I shall attempt baking macarons another time. Its nice to see the macarons you bake turn out crispy, moist and colourful. The best thing about learning to bake macaron is that you get to save a lot if you are good at it. Macarons are quite pricey and one macaron sells for $1.60 at Bakerzin.
Here are some sites which i referred to when baking the macarons:
1) how to make macarons
2) basic technique and simple macaron recipe
3) coffee macarons

For those who are interested, refer to link 3 for the baking timing and temperature control. Read links 1 and 2 for basics on macaron making. Good luck!
Posted by Bakertan at 3:24 PM