The air seems rather quiet in the regional blogosphere lately. Most blogs which I frequent seem to be taking breaks. I have been taking short breaks myself, doing blog-hopping less frequently and not leaving comments as often. In the meanwhile, I am still baking and trying out recipes as usual and the inspiration for baking never cease to end. For the month of may, I seem to be going on a chocolate streak or rather a chocolate rampage to satisfy the chocoholic in me.

Now that I have been baking for a while, I have clear vision on the direction I am heading for. The impression of fondant cakes has been stubbornly stuck in my mind recently and I cannot help but want to think of opportunities to get my hands working on them. With that in mind, I will be planning fondant cupcake projects fortnightly or once every month so as to gain some practice and experience. Since my mum's birthday is around the corner, it would be a great theme to kick start the cupcake project. I am excited just at the thought of it. Great man! 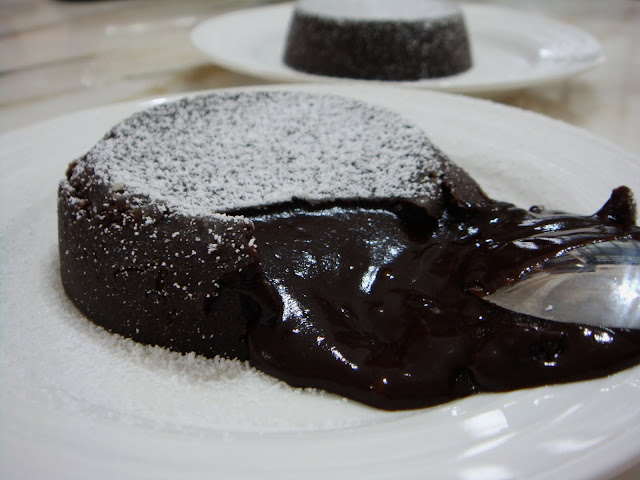 When it comes to desserts, I am not a big fan of desserts that are served warm. There are some exceptions though, one of them being the Chocolate Lava Cake or Chocolate Fondant Cake. Even though the name suggests that it is a cake, it is more like a rich chocolate pudding instead. To get the best experience out of your chocolate lava cake, do serve it warm and top it with a generous scoop of vanilla ice-cream. The coldness and the velvet texture of the ice-cream helps to contrasts the warm-rich-gooey pudding and adds colour to your gastronomic experience.

With a hint of coffee aroma, this chocolate lava cake is a potent dessert, maybe even too rich for the palate when one asks for additional servings, which is most possibly attributed to the additional 4 egg yolks. Death by Chocolate Lava Cake would serve as a suitable name for this dessert.

I am submitting this entry to Aspiring Bakers #7 - Chocolate Delights May 2011, hosted by DG from Tested and Tasted.

Adding egg yolks to melted chocolate mixture - When the chocolate and butter have fully melted and results in a smooth mixture, remove the heatproof bowl from the heat. Whisk in the egg yolks into the chocolate-butter mixture until well combined. Set aside to allow the mixture to cool.

Chilling the batter - Spoon batter equally into prepared ramekins (greased and floured) or tart tins and chill for at least 30 mins.

Baking the chocolate lava cake - Preheat oven to 200 degrees C. Bake batter for 8-10 mins. Serve warm in ramekins/ tart tins or allow the pudding to cool and set for a while before running a small knife round the perimeter and turning them out onto serving plates. Serve with vanilla ice-cream.