Have you ever wondered, what is your favourite flavour when it comes to baking? For me, it would be durian, chocolate and lemon, in that order of preference. Ashamedly, I have yet to get my hands working on any durian bakes even though I consider myself a self-professed durian lover. Transporting durians poses a major challenge to me as the King of Fruits is not allowed on public transport over here due to its overpowering aroma which may be deemed pungent by some. Maybe I will work on a durian dream cake for my coming birthday, but that will take quite a few months to happen.

On the other hand, chocolate is a staple in my pantry. Whenever I pass by baking supplies stores or supermarkets, I will always make a concious effort to stock up chocolate pistols, bars and cocoa powder (Valrhona especially, neat!). 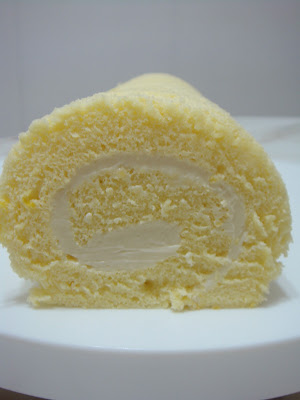 Lemon is highly versatile and probably the most widely used fruit when it comes to baking, I supposed. It brings out a pleasant, soothing, tangy fragrance when used for baking and I tend to incorporate it in a variety of bakes such as cookies, tarts, cakes and cheesecakes. The results never fail to amaze me. 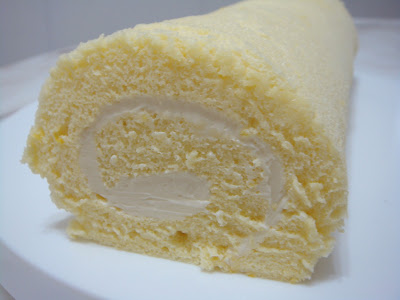 Previously, I mentioned that my baking nemesis is Swiss Roll. After a couple of practice, I think I have gained some confidence and a better comprehension on how to handle this trouble maker. The key is to roll the sheet cake tightly. If the initial roll is good enough, there shouldn't be much problem later on. Even if the sponge breaks at the start, the cracks will be well concealed once the swiss roll comes together.

This time round, I tried using the chiffon method for the first time (for swiss rolls) to make this Lemon Swiss Roll. Where sponge cakes are concerned for me, chiffon cakes are preferred any time over genoise. To date, I have yet to try out the separated-eggs sponge method for swiss rolls or any bakes. It is said to yield a soft and fluffy sponge and is recommended by Grace and Bee Bee. 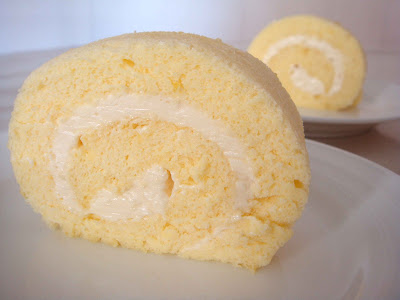 As compared to swiss rolls made via the genoise sponge method, this lemon swiss roll is soft, very moist, fine crumbed and fluffy to the bite, not forgetting that it has a nice citrusy touch imparted by one of my favourite baking ingredients. 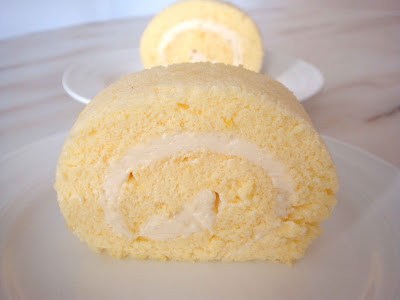 Instead of using the lemon buttercream stated in the book, I used my leftover Honey Lemon Buttercream for the filling. Although it may require a little more effort to produce a swiss meringue buttercream, the results are worthed every effort put in. I am offically a Swiss Meringue Butttercream convert.

I will be submitting this entry for this month's Aspring Bakers #5: Fruity March  hosted by Jess from Bakericious.

Making the buttercream:
Dissolve sugar in egg whites - Place egg whites and sugar in a heatproof bowl sitting over a pan of slightly simmering water without the base of the bowl in contact with the water (double-boiler). Whisk the mixture constantly until the sugar dissolves completely. Rub the egg white mixture with your fingers to check if it is still gritty to test if the sugar has fully dissolved. Egg white mixture should be warm to the touch. Remove bowl from the heat. Do not allow egg whites to scramble/coagulate.

Incorporating butter - Add in butter to beaten egg whites in 3 additions and beat on medium speed. The mixture may become watery as butter is being incorporated. Just continue beating. After the third addition, beat the mixture until it becomes fluffy and firm, like creamed butter.

Flavouring the buttercream - Add lemon juice and vanilla extract to buttercream and beat well to mix. Add in honey by the tablespoon to taste.

Beating egg whites - In a metal bowl, beat eggs whites starting with low speed. When the egg whites turn frothy, slowly increase the speed to high and beat until egg whites are soft peaks (egg whites form peak that is drooping). Add the sugar (65g) slowly at this point and continue beating until egg whites are nearly stiff but still moist and not dry. This is when the bowl is overturned, the egg whites would not budge. Egg whites will form shiny and creamy upright peaks when beater is withdrawn. Take care not to overbeat the egg whites as they will become dry or may water out.

Baking the cake - Pour batter into a 12 x 12 inch tin or 10 x 14 inch lined swiss roll tin and bake for 8- 11 minutes. Start checking for doneness at 8 mins. Cake is done when inserted toothpick comes out clean

Rolling the cake - Make a few slits across the breadth of the cake at the side nearest to you with a knife. Apply 2/3 of buttercream evenly over the surface of the sheet cake. With the shorter side/breadth facing you (if using 10 x 14 inch pan), roll the cake up tightly to form a swiss roll. Use the remaining 1/3 buttercream to frost the exterior.

Notes:
1) Apply the amount of buttercream desired for the swiss roll filling. The rest can be kept and chilled for frosting cupcakes etc.

2) Make the buttercream first before making the chiffon sponge cake.